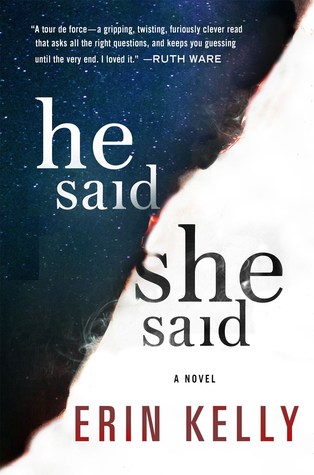 He Said/She Said by Erin Kelly

When I read the description for He Said/She Said sometime last year, I knew it was a book that I had to read. I was positive I was going to like it. However, with all of the hype I started to worry that I was expecting too much. Over a year later I finally had my hands on it and was excited to start reading.

The book opens with two women standing in a restroom, side by side at the sinks in front of the mirror. They are trying to avoid looking at each other. Both are wearing black. We don’t know if this is past or present. Who are these two women? They finally lock eyes in the mirror and both wonder…

“How did it come to this? How did we get here? How will it end?”

London March 2015: We meet Laura first. She tells us about London and how she didn’t choose to live there, but loves it now. They live in a bustling part of London which gives her and her husband what they need….anonymity.

Laura is pregnant and Kit is going out-of-town to see the latest eclipse. Laura is very anxious but wants Kit to enjoy himself. She knows he would stay if she asked. In some ways Kit’s glad to be traveling alone, and that he doesn’t have to worry about Laura’s safety too. He’s been protecting her from the fallout of what happened on Lizard Point for so long and he will do whatever it takes to keep it that way.

“I’m about to leave my pregnant, over-medicated, anxious wife to travel across the seas to another country where there is every chance the woman who nearly destroyed us will be waiting for me.”

Kit is an eclipse chaser. Eclipses have been a part of his life since he was a young boy. At age twelve he saw one of the greatest eclipses ever…. and since then he has devoted his life to recapturing that experience.

1999 Lizard Point – They had been together for only six months when it happened. An eclipse festival. Basking in the afterglow of her first eclipse, Laura almost misses the purse laying on the ground. Kit heads off to see if anyone has lost a purse. Laura sees that the purse must have spilled as there are some coins scattered on the ground.

As Laura rounds a corner she comes a horrifying scene. Who and what she sees changes the lives of everyone involved.

This was quite a thought-provoking read. Told from both Kit and Laura’s POV. It takes place over more than seventeen years.

This novel had me constantly asking myself what I would do in similar situations. If I came upon a scene like Laura, what would I do? Would I do what she did? Would I freeze?

I wasn’t just questioning myself about that moment but so many of the other decisions made by the characters over the course of the novel. It’s so easy to say I would do what’s “right” but do we always know for certain what is right? And would I make the same decision today as I would have fifteen years ago? With all of the knowledge gained with age and experience? It’s hard to say…

With great twists and an engrossing story-line, “He Said/She Said” was a compelling and addictive read that I really enjoyed. While I was definitely interested from the very start, it was a bit of a slow burn, but I’m glad I stuck with it. There is a lot of talk of eclipses which I wouldn’t have thought I would be interested in. However, I soon found myself googling eclipse pictures along with some of the phenomena like “Shooting corona”, and “The diamond ring effect”.

Like any other novel, this may not be for everyone, but I really enjoyed it. A story of betrayal, lies, relationships, trauma, guilt, and loyalty. He Said/She Said checked all the boxes for me. It was a great read that I highly recommend.

Thank you, Minotaur Books and NetGalley for providing an advanced readers copy of this book for me to read in exchange for my honest review.