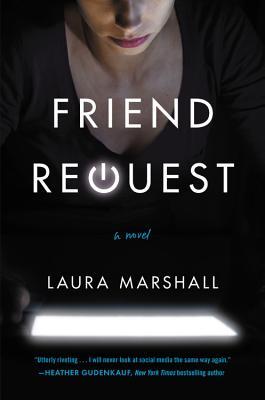 When I first heard about this book….I wanted it. I knew I had to read it. Social media fascinates and terrifies me in equal measure. I will try to get my hands on any book that has social media at the heart of it, and “Friend Request” fit the bill perfectly.

The book opens in 2016. Louise Williams is a single mother to four-year-old, Henry. It’s an ordinary day when Louise receives the email that will change her life. Henry is at her ex-husband, Sam’s house and she has spent the day working. At first she was a glad to see she had an email waiting. However, after opening it, she’d give anything to go back to the boredom she was feeling just minutes before. She reads….

Instantly, Louise feels like she can’t breathe, and her first instinct is to slam her laptop shut.

She feels that she must be mistaken, she MUST have read the email wrong or she’s seeing things. But when she opens her laptop again….it’s still there.

She has no idea who would play such a sick joke on her. She’s tempted to delete the message and the friend request. But another part of her is morbidly curious….and wants to know. Curiosity wins out and she hits ‘Confirm Request’.

It’s been 25 years since she’s seen the face staring at her from the Facebook profile picture.

We know there’s something that Louise feels guilty about, something to do with Maria that happened in High School in 1989.

“I’ve been a friend, a daughter, a wife, a mother. Yet all the time, in the back of my mind, this one unforgivable act has loomed – squashed, squeezed, parcelled, but always there”.

Is someone playing a joke on her? But who? Somebody from the upcoming school reunion? Or is it something more sinister? Could Maria possibly be alive? And what secrets is Louise keeping that she’s feeling so guilty about? What has she done?

“Friend Request” was all that I was hoping for and more. Not just suspenseful, it also has great dialogue and the issues brought up are so relevant to what’s happening in the world today. Not just social media but also friendships, bullying, marriage, sex and more. The characters were very well-developed. I just loved little Henry. And I loved to hate bitchy Sophie Hannigan.

Social media really makes us all vulnerable. Sometimes just looking at someone’s Facebook page can bring back teenage feelings, insecurities from a time when all you wanted was to be liked. The constant pressure to fit in. The rumors that would spiral out of control. Everyone just wanted to go the good parties, hang out with the popular crowd. Not realizing how so much of it wouldn’t matter years later. I had a decent high school experience, though far from perfect. But I also saw things that I know must have really hurt people, and I can remember a few “Sophie’s”.

The story alternates between past and present. Back and forth between 2016 and 1989. Also interspersed throughout the novel are musings from an unknown source. This adds to the mystery. Leaving the reader to guess whose private thoughts they were. I wanted to know who it was. I had my guesses, but I wasn’t even close.

“What would life have been like if she’d made a different choice then, not just for her, but for everyone around her?”

The author really knows how to pump up the suspense and tension until your head is spinning, trying to figure out who is telling the truth….who to trust. With excellent twist and turns, especially in the second half of the book. The last few chapters so tense that there was no way you could have pried the book out of my hands. I was desperate to know what happened.

Not everyone is who or what they seem. Can we ever REALLY know anyone?

This was a well-written and fast-paced exciting read. A fantastic debut novel full of mystery and suspense, real world issues, and relatable characters. I thought the ending was surprising and satisfying. I can’t wait for more from Laura Marshall!