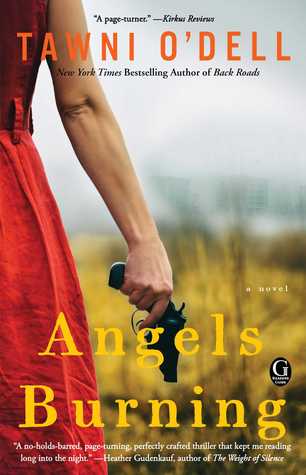 This was the first my first read from Tawni O’Dell, but I doubt that it will be the last.

“Angels Burning” opens with the horrifying discovery of the body of a 16-year-old girl. The murdered girl, Camio Truly a member of the notorious and extremely dysfunctional Truly family that resides in the small Pennsylvania town. Police Chief Dove Carnahan, who has lived in the same small town for 50 years is determined find who killed Camio and why.

Dove and her team are investigating the case with Police Detective Nolan Greeley. Throughout the investigation some of the demons from Dove’s past pop up, and we learn more about the tragedies in her family’s past.

The author did a great job showing the dynamics of the small town and a great portrayal of the dysfunctions in some troubled families. The characters were quite detailed and I had an interest in all of them. Tawni O’Dell brings a lot of life to her characters and I understood them for who they were, even though most of them were people I would never want to know. I was rooting for Dove.  I enjoyed her  sister’s character as well as many others. One of my favorite characters was the young Derk Truly. The author’s description of him and his antics were priceless. Although this was a thriller, I found there were many entertaining and funny moments.

A lot of twist and turns both with the present murder case and also with Dove’s past. The book deals with some very upsetting issues but I thought that the author really handled them well. Of course as well as you can handle issues like murder and abuse etc.. In my opinion she gave the details but didn’t seem to go overboard in her descriptions.

It took me a little while to get into the story but once I did I found I had a hard time putting it down. My Kindle died when I only had about 20 percent left and I was right in the middle of an important part! I was excited to get back to this book. There was a lot going on but I never felt lost or confused. There were a lot of great twists and turns both with the current case as well as with Dove’s past. I liked the fact that I wasn’t able to guess what was going to happen next.

The plot was intriguing and compelling and I will definitely be reading more by Tawni O’Dell.