My choice for this week is:   The Second Captive by Maggie James 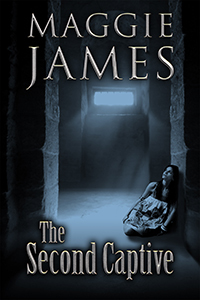 Stockholm syndrome: the psychological tendency of a hostage to bond with his or her captor.

Beth Sutton is eighteen years old when Dominic Perdue abducts her. Held prisoner in a basement, she’s dependent upon him for food, clothes, her very existence. As the months pass, her hatred for him changes to compassion. Beth never allows herself to forget, however, that her captor has killed another woman. She has evidence to prove it, not to mention Dominic’s own admission of murder.

And discovers Dominic Perdue is not a man who let’s go easily. Meanwhile, despite being reunited with her family, she spirals into self-destructive behaviour. Release from her prison isn’t enough, it seems. Can Beth also break free from the clutches of Stockholm syndrome?

A study of emotional dependency, The Second Captive examines how love can assume strange guises.

Stockholm syndrome, or capture-bonding, is a psychological tendency in which hostages express empathy, sympathy,  and can have positive feelings toward their captors. At times the “love” they feel can even lead to them defending their captor.

I’ve always been interested in Stockholm syndrome. We see it mentioned often in cases of kidnappings. However, it can also be present in any type of abusive relationship and even used to describe an animal who stays with an abusive owner.

The Second Captive is a psychological suspense story about Beth Sutton. Beth was kidnapped and kept captive for two years. We learn a lot about what happened to her in the two years she was kept captive, as well as how she copes after she escapes.

I read this book in a just a few sittings. The characters were all well-developed. The plot was great, very exciting and intense. I found the alternating points of view easy to follow. I enjoyed knowing what was going on in the minds of all of the characters during Beth’s time in captivity as well as present day – two years later.  I was gripped wondering what was going to happen next.  In the end, I was extremely satisfied with how it all came together. It was very apparent that the author did a lot of research on Stockholm Syndrome.

A great psychological thriller from Maggie James that I highly recommend.

8 thoughts on “Throwback Thursday – The Second Captive by Maggie James”