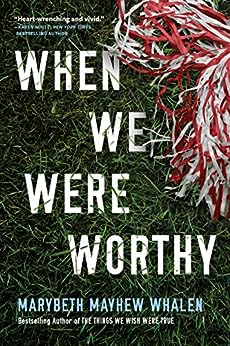 When We Were Worthy by Marybeth Mayhew Whalen

After reading the description for WHEN WE WERE WORTHY, I knew it was another novel that I just had to read.

The events in the novel take place in, WORTHY, GEORGIA. Population 4162

Worthy is the like most small towns, everyone knows each other and their business. On Sundays in Worthy, you’d better show up in one of the towns many different churches or you’d be gossiped about. Not a lot to do in town, a few fast food places and one decent restaurant… Chessman’s. Not a lot of places for teens to hang-out. There is one pub but most of the teens know that if they even TRIED to sneak in, SOMEONE in the small town would tell their parents.

Fall in Worthy = Football. This is a town where football is EVERYTHING. Once the season starts, Worthy is more team than town.

The book begins with “The Girls” Mary Claire, Brynne, and Keary telling us about that night.

That night, The Worthy Wildcats had just won their game. They were in the midst of another winning season and it looked like they were headed to the state championship.

“Our boys really showed up tonight”

Webb Hart, Ian Stone and Seth Bishop are the team’s heroes. The boys who can do no wrong in Worthy. But if they did do wrong? Most often it was just swept under the rug.

After the game, the teens had a party to get to. Mary Claire, Brynne and Keary got ready at Mary Claire’s house. Normally Leah would be with them. Brynne told the other two girls that Leah had something important to do.

They think back to the moments that could have changed everything. How many of those moments are in a day? How something so small can change everything. They were all excited about the night ahead, never thinking that it would end so tragically.

Ava Chessman is not from Worthy originally, but her husband Clay is. Ava is a substitute teacher and Clay runs Chessman’s his families restaurant. She was at the game with her husband, Clay. Feeling ignored she gets up to buy a drink. That’s when she runs into the one she calls “trouble”

People should never forget that in Worthy…someone is always watching.

Marglyn Miner can’t stop beating herself up for the argument she had with her daughter, Mary Claire that night. Marglyn is at the mall later that evening when her phone rings, it’s her husband’s phone number, but when she hears a strange voice asks if she is Marglyn Miner, she instantly knows something is wrong. Then she hears words nobody ever wants to hear…..

Darcy LaRue is trying to keep it together. She’s separated from her husband, Tommy who was one of Worthy’s previous football stars. They have one son together, Graham. When Tommy suddenly shows up at her house, she wonders why he’s there. But then she suddenly remembers all the sirens she’d been hearing. Tommy tells her they need to get to the hospital.

Leah Bennett is thinking that no matter what the football players do, they get away it. Boys will be boys, they say. Brynne is cheer captain and Leah is just a sophomore who was lucky to be cheering varsity. So when Brynne tells her she needs to “go the extra mile“, she does.

What was Leah doing that was more important? Why did Brynne seem so secretive about it?

I enjoyed this novel and read it in just a couple of sittings. Four women, all with their own secrets. A terrible tragedy that will bring most of these secrets to light. We see the story through the eyes of many characters. How the tragedy affected each of them as well as those they loved. Well defined characters, all with flaws, some bigger than others. What happens when a lapse in judgment leads to such horrible consequences? There are many benefits to living in a small town but at the same time in a small town your mistakes follow you everywhere and are seen by everyone.

Everyone wants answers. Someone needs to pay! Out for blood for some actions yet turning a blind eye to the actions of others? What happens when the answers you are looking for are not what you were expecting?

“In Worthy, truth lived right next door to perception, but they weren’t exactly friendly neighbors”

WHEN WE WERE WORTHY is well written and thought-provoking novel about love, lies, guilt, grief, forgiveness, and so much more. I am really looking forward to reading more from Marybeth Mayhew Whalen.

Thank you NetGalley and Lake Union Publishing for providing an advanced readers copy of this book for me to read in exchange for my honest review.