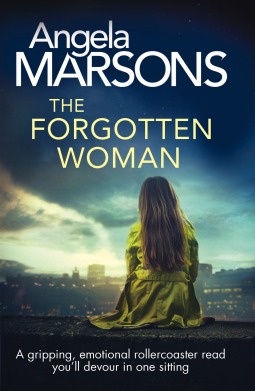 This is the first book I’ve read by Angela Marsons. Coincidentally it’s also the first novel she wrote. It was previously published as “My Name Is” in 2013.  I thought it sounded like something I would enjoy, and I was right!

As the book opens we meet 23-year-old Kim Mason as she’s on her way to her very first AA meeting. She’s late and thinks about turning around and going back to the safety of the hostel. But she knows she HAS to do this. In her rush she doesn’t check closely for traffic and is splashed and almost hit by a very fancy car. She finally gets to the meeting and she’s surprised by all of the different people she sees. There are people from all walks of life, including doctors and lawyers. “Miss Fancy Pants” the driver of the BMW that almost mowed her down is also there to Kit’s dismay.

Kit had an extremely difficult childhood. After an extremely traumatic experience, Kit left home for good. However, it wasn’t long before she was locked into another nightmare. A nightmare that lasted eight years. Three months ago she was finally able to escape. Kit reassures herself that she’s safe now. But when she sleeps she still sees the face of pure evil that doesn’t want to let her go. While the bruises have faded, the mental scars and physical scars are still there, making sure she never forgets. And now that she doesn’t have the escape of alcohol, she has to find a new way of living with the memories of all that she’s been through.

Frances Thornton is a lawyer and hasn’t ever lost a case. Fran had the best of everything growing up… food, clothing, a great education. But the things that Fran needed more than anything, acceptance and love were never available. As she got older she found that a drink or two (or more) could make some of those bad feelings go away. She could forget about things that caused her so much pain. She functioned quite well for a long time. Even though she drank she was still great at her job. That is until she passes out while defending a client in a very important case.

It’s at the first AA meeting that Kit and Fran meet. They come from completely different backgrounds but share the common bond of struggling with alcoholism. While their first meeting doesn’t go well, it’s not long before they realize they just may be exactly what each other needs.

But secrets and demons from their past threaten to come forward and destroy the lives they are both trying so hard to re-build.

This book isn’t just about one person’s story. We have Kit’s story, Fran’s story as well as the story of their friendship. The author told these stories so well. The challenges and struggles that they faced, as individuals and within their friendship.

***Warning*** There are parts of the book that are very violent. These could be triggering for some readers. However, I don’t feel like the author went overboard with the descriptions of what happened, but provided enough detail for the reader to understand just how horrible these situations were.

I had a lot of trouble putting this one down. It was well-written and incredibly gripping. I was so emotionally invested into these characters, I wanted so badly for them to succeed. You can be sure I am now a huge fan, and I look forward to reading more from Angela Marsons.