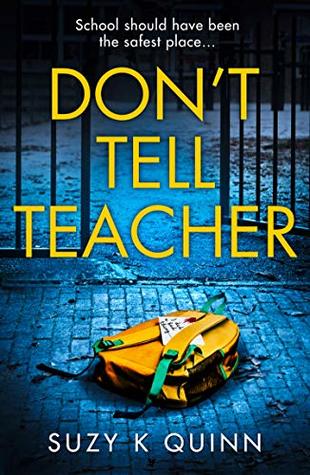 Appearances can be deceiving…

After a recent divorce, Lizzie Riley and her six-year-old son, Tom are trying to make a fresh start. One of the biggest changes is that Tom will now be attending an academy school called Steelfield Academy.

When Lizzie sees the school for the first time, she is surprised. It has a tall fence all the way around the property, and the windows have bars on them. It looks a bit like a prison. Then she sees there’s a hole cut in the fence…

Is someone trying to get in or out?

Lizzie can tell Tom is worried.

“What if Dad finds us”

When Lizzie meets the headmaster there is something about him that instantly sets her on edge. He tells her that the school has a long waiting list and that they were lucky to get Tom enrolled. She’s also told that the school forbids parents from entering the grounds or the school itself. All of this leaves a bad taste in Lizzie’s mouth. However, she tries to make the best of it and tells Tom it will be great.

But it’s not long before Lizzie feels like something strange is going on. Tom is often exhausted and moody when he gets home from school. Lizzie asks him what’s wrong, but he won’t talk about it, and if she pushes too hard, he just says he doesn’t remember. Lizzie tries to talk to someone at the school but again she’s told just how lucky Tom is to be a part of such a great school.

When Tom comes home with strange marks on his arm, Lizzie has had enough. She is determined to find out exactly what is happening at this school.

What exactly is going on at Steelfield Academy?

“Don’t Tell the Teacher” was a dark and clever story with intriguing and devious characters. I did think that the story slowed down a bit in the middle, but found things picked up again rather quickly. Some suspension of disbelief was necessary, but I liked that I couldn’t figure out what was going on, and in the end was an excellent twist that I did not see coming.

Overall, this was a chilling and enjoyable psychological thriller!