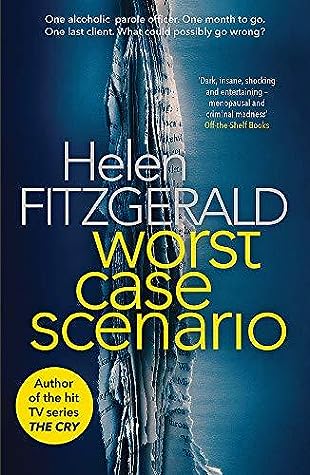 “Every time Mary tried to relax in a bath, a paedophile ruined it.”

With a first line like that, I was pretty sure this was going to be one wild read.

Shocking, hilarious, moving, twisted, and gritty are some of the words that come to mind when I think of this novel.

Fifty-two year old, Mary has worked as a probation officer in Glasgow for almost thirty years. Mary is currently going through “the menopause”. She is stressed and moody, and all alone while her husband works away from home. Taking sick time is frowned upon and Mary is on notice for how many sick days she’s taken.

But now Mary has had enough. She gives her one month notice.  This way she can leave with her record intact and her head held high.

How much can go wrong in one month?

Mary is meeting her last new client who is in prison for murdering his wife. While incarcerated, Dr. Liam MacDowall wrote a book, “Cuck: Letters to My Dead Wife”. The book and MacDowall will be released soon. They have a meeting to go over all of the rules and restrictions MacDowall will have to abide by once released. MacDowall’s lawyer, publisher, counselor, and twenty-six-year-old daughter, Holly attend the meeting. MacDowall plans to live with Holly after his release.

Mary met with Holly a few days earlier and the visit did not go well (but it had me in stitches). Mary doesn’t think Holly should let her father live with her “A load of shite. I’d prefer to share a house with Hannibal Lecter”.  Holly can’t believe how Mary talks to her and tells her that she’s going to make a complaint. Mary has no problem handing her a complaint form. Years ago this would have had Mary in a tizzy wondering how she could fix things.

That evening, after the meeting, Mary tries to settle in for the night…

”This might have been the day, the hour, the minute, the moment that she made the decision that ruined her life”

Mary will soon realize just how much can go wrong in one month.

I thought this was a terrific read! It was also a quick read at just over 200 pages.

The author, Helen Fitzgerald obviously has a terrific sense of humor. Mary is a character many will relate to. Her dry sense of humor and outspokenness is delightful. I often wondered, did she really just say that? Her struggle with “the menopause” is hilarious and realistic!

“A hot flash is like an orgasm. If you’re not sure you’ve had one, you haven’t.”

“Worst Case Scenario” makes no apologies. This book may not be for everyone, but in my opinion, it was a great read.

Dark, compelling, disturbing and unsettling… but oh so entertaining!

I’d like to thank Orenda Books for providing me with a copy of this novel. All opinions are my own.