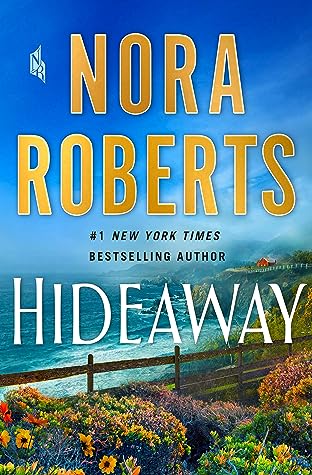 Over the years I’ve enjoyed many books by Nora Roberts. Her last two novels, Undercurrents and Shelter in Place were both very good reads. After reading the description for Hideaway, I was excited to get started.

The Sullivan’s were a talented family. Liam Sullivan was an icon whose career spanned decades. Liam’s great-granddaughter, Caitlyn Ryan Sullivan (Cate) made her movie debut at just 21 months old. She starred in another movie at age six, delivering her lines with ease. That movie had been her great-grandfather’s last film. At age 92, Liam died in his sleep with his beloved wife of sixty-five years next to him.

Three weeks after Liam’s death everyone gathered at his Big Sur estate to celebrate his life. It was a large affair with music and laughter. Ten-year-old, Cate was organizing a game of hide and seek with her cousins. She knew the perfect spot to hide. She’s on her way to her hiding spot when she sees a man in a server’s uniform. She tells him she’s playing hide and seek. He moves quickly and she doesn’t see the needle coming.

It isn’t long before Cate’s family realizes she’s gone. They are terrified. Where could she be?

Then the phone rings…

Cate wakes up in a strange room.  Although she is scared, she manages to escape. Her family is relieved she’s safe. But who was responsible for her kidnapping?

Cate changes after the incident. She used to be very independent but now she’s afraid to be alone. The ramifications of what happened that day, will stay with her for many years to come.

Time passes and just when things seem to be going well for Cate, something happens that brings the nightmares and anxiety flooding back.

Then the phone calls start, taunting and terrifying. A voice tells her it’s far from over…

Someone wants vengeance against Cate and her family.

Will Cate ever have the life and love she wants and deserves?

I thought this was a good read, though it wasn’t my favorite novel by Nora Roberts. The story is broken into four parts and takes place over many years. I found part one and part four most enjoyable, but I thought the middle parts were long-winded. There was some suspense though I did find it a bit predictable. However, I still liked the story,  many of the characters, and I wanted to see how things turned out for all of them.

Overall, I thought this was an interesting story about family, betrayal, vengeance, and love.