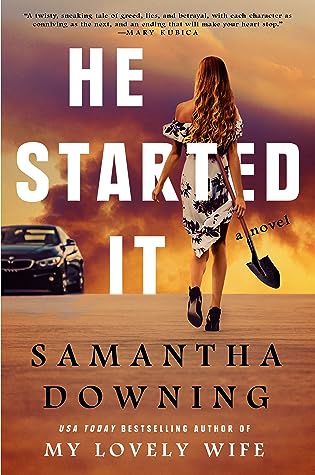 He started it, but someone else is going to finish it.

A unique and gripping story!

I REALLY enjoyed Samantha Downing’s previous novel, “My Lovely Wife” so I was thrilled to get my hands on this novel.

Twenty years ago Beth, Portia, and Eddie’s grandfather took them on a road trip. He said it was going to be a great adventure. It had been a boring hot summer so far so the kids were excited.

Their grandfather had always been easy going with a good sense of humor, but soon the children would see a very different side of him. It was a long trip through many states. Some of the places their grandfather took them were “normal” touristy places while others were definitely NOT.

It supposed to be a wonderful adventure. It turned into something that they would never forget.

The Morgan siblings haven’t seen each other very much over the years. Now their Grandfather is dead. He didn’t want a funeral or memorial service. He just wanted a brief obituary (which he wrote) and he wanted to be cremated. His will indicated that he also wanted his grandchildren to go on the SAME road trip they took all those years ago. They were to scatter his ashes at the end of the trip. After that his estate would be equally divided between them. But he stipulated that if anyone ends up in jail, doesn’t complete the trip, or deviates from the original trip, they will get nothing.

If they want the money, they must take the road trip.

The second road trip has two new passengers. Eddie’s wife, Krista and Beth’s husband, Felix. Beth and Eddie’s spouses don’t know what happened during that first road trip, and there’s a lot they don’t know about their spouses.

They set off and all goes well enough at first.  However, it isn’t long before everything changes.

The story is told from Beth’s point of view. Interspersed between chapters are journal entries from the first road trip written by an unknown character. We learn more about the circumstances around the first road trip, the sibling’s relationships with each other and their spouses.

There’s a fine line between love and hate.

This story snuck up on me, and before I knew it, I was hooked! The foreshadowing had me saying “just one more chapter”, again and again.

I usually have a hard time with unlikable characters and this story has more than a few. However, it didn’t bother me this time. The flawed characters were perfect for this story. I had mixed feelings about the ending, but I honestly never saw it coming!

Entertaining with no shortage of drama!!

17 thoughts on “BOOK REVIEW – He Started It by Samantha Downing”