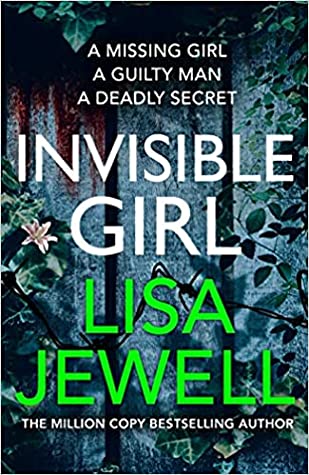 I’ve enjoyed quite a few of Lisa Jewell’s novels. This one was a little different than others I’ve read, but I thought it was a great read.

Seventeen-year-old, Saffyre Maddox often has dark thoughts that frighten her. Something happened when she was ten-years-old. Something that changed her. She started seeing a child psychologist named Roan Fours when she was twelve. She saw him for three years. Roan Fours felt that Saffyre made great progress, but she disagreed. Most of the time, Saffyre feels invisible. She likes being invisible because she can collect more secrets that way. But if those secrets got out, many lives would be changed.

Thirty-three- year old, Owen Pick is also invisible but wishes he wasn’t. He doesn’t have any friends and he’s never had a girlfriend. He’s never sure how to act around women. He often feels like he’s done something wrong.

Life is about to get even harder for Owen Pick. He’s not going to be invisible much longer.

When Saffyre goes missing, almost everyone thinks Owen is responsible. But is he?

A gripping domestic suspense novel about a group of people whose lives are forever changed when a young woman disappears.

The story is told from multiple points of view, but I most enjoyed hearing from Saffyre and Owen. Many interesting twists kept me on my toes. This story deals with many relevant and important issues. Some parts may be upsetting or triggering for some readers. It was interesting and disturbing learning about the world of an involuntary celibate (incel).

An intelligent story with an engaging plot that kept me gripped from start to finish. I’m excited to read more from this author.